I have been re-reading your poem, »Heresy,« recently, and have been struck by its central proposition, which is that translation is a form of forced resettlement, and amounts to heresy – at least according to the speaker of the poem, with regard to the person he’s addressing. At least I think that’s what it’s saying. By way of the rather innocent-looking »and,« the poem’s second line seems to equate »translate and displace«: the two activities that the addressee is engaged in.

On the face of it, this is quite a contrast to the way in which translation is usually portrayed. We tend to think of it as a peaceful and constructive form of dialogue, enabling new forms of community and thus serving, rather than betraying, a higher good. There are, of course, theories of translation that caution us against neocolonial forms of appropriation, but even they assume that, while any form of communication across borders is risky, we won’t end up in Hell for trying.

But given especially that you are one of the foremost translators into the English language today, your poem’s stance should not easily be dismissed. So what precisely can the heresy be found in? It situates heresy on the level of a betrayal of »literal blood and bone,« thus postulating – with a wry sense of humour? – that the letter (»literal«) and the body (»blood and bone«) are one, and that the translator is unfaithful to this combined and unique presence. This betrayal is called, by the poem’s final line, a form of »worship [of] what is not.«

What would be a very harsh indictment indeed is somewhat – but only somewhat – mitigated by the preceding lines, which spell out the addressee’s (presumed) motivation: »Your long desire to see / Salvation in a face // Unstable as your own«. The road to heresy is paved by the desire for salvation, and for the visible apparition of salvation at that – by an unwillingness to ackowledge the imperfection of the literal world, its legitimacy, and dignity.

Translation – and this is the »punchline« of your poem – is borne out of an inability to acknowledge one’s own, and others’, instability. This instability is not immutable but, as the poem suggests, any attempt at altering it is a dangerous endeavour.

Dear Dick, I hope I have not been horribly misunderstanding your poem. You are a translator – what do you make of your own warning?

With all good wishes, and great admiration!
Christophe 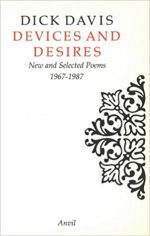