If this were a normal book of poetry, I would write about ›Winter Stars‹ and what a great poem it is. Its subject is Orion, both the constellation and, by implication, the hunter hero who »strides across the night.” Eloquent yet not pompous, the diction of your poem does justice to its grand, mystical subject, and little changes and register such as the slightly more colloquial »gear« used to described his »sword, his club, his glittering belt« and of course his unflattering characterisation as »not too wise” lend credibility to the human voice of the text. Its final two stanzas are a portrait of us who choose not to go out hunting when it is freezing cold but rather stay indoors. What strikes me most about the poem is its final line: »When he moves on, the ice will melt.« There is some comfort in this prospect of spring returning, but there is also a much larger, subliminal threat contained within it. We seem to be engulfed in a world of ice for as long as the hunter decides to roam around where we are, and his sheer presence seems almost to be the reason for winter. Are we at the mercy of a celestial killer who is light-years beyond reasoning, not too wise but all too powerful?

If this were a normal book of poetry, I would go on to point out that there are quite a few of these sudden eruptions of judgement and unease jutting out from the narrative splendour of your lyrical stories. There is your exhortation against alienation, »that eyes averted make no one immune«; your impatient verdict after an hour of listening to a murder of crows, that »We’ve listened, not by choice«; your disillusionment with mankind post-enlightenment who think that all kinds of cruel acts »remain tolerable / if kept for the most part out of sight«.

If this were a normal book of poetry, I would finally try to show that it deals with painfully singular moments of loss brought about by the onslaught of forces decidedly beyond our control, such as time, flood, fire, and our inability to be attentive when we really should be.

But A Late Spring, and After is not a normal book of poetry. The third of its four sections contains four pages of arresting, sparse, and courageous prose about the death of your wife. Husband, witness, helpless carer, final interlocutor, organiser, and terrified survivor, you emerge from within these pages first and foremost as an author, supremely skilled at expressing what cannot be expressed. It would be cruel to suggest that the first two parts of the book were merely an extended exercise in trying to face up to what is coming – but it is in these four pages of prose that your powers as poet culminate. I am so in awe of them that I feel hardly qualified to quote from them.

The poems on either side of ‘What Happened’ are much more than just context. The full scope of what poetry can achieve is on display here, as though to justify its absence from the surface of the four pages in between. Here they are, sound and rhythm and pain: »The orchestra has stopped. […] two notes go on vibrating […] One, two: insistent pair […] ›One, two‹ adds up to naught. « Here it is, the artist’s reflection on his own work: »One, two: the pace I keep / requires no grace of art.« Here they are, the private and the encyclopedic, personification and soliloquy: ‘The Loss of the Joy of Cooking’ is the title of a poem on »halving quantities« of what you used to use in the kitchen where pleasant aromas have been replaced by onions »sputtering angrily,« and the communal wonder of a shared meal has vanished where »The cold plate waits. Nothing now tastes the same.« Here it is, your mastery of blank verse, resurfacing intact a few months after a funeral: »It smelled like spring, or like spring ought to smell.« Here it is too, the poet’s honesty:

I soon grow sick of my material being,
my helpless casting of shadows, my sham of a
life persisting, my habit of taking up space.

There is very little the reader can say in response to these poems of loss from which we gain so much. We may attempt a gesture towards consolation, but words fail us where you held onto them.

Please accept my apologies for writing a normal letter in reaction to an extraordinary book of poetry and to everything contained within it.
Christophe 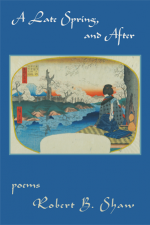 »A Late Spring and After. Poems by Robert B. Shaw« bei Pinyon Publishing kaufen