I hope this finds you well. I am writing to tell you that recently I re-read your poem »Ibn Battuta« with a well-travelled friend, and once again, it did not fail to have an impact – we were both speechless for a few moments. Your poem‘s three parts are of increasing intensity. In the first part, largely made up of an extended parenthesis, you recapitulate the various, headline-grabbing events that the Muslim world‘s best-known traveller experienced on his very long journeys.

The event you zoom in on, however, appears to be rather unspectacular. It occurs, as your first line says and as the second part of your poem elaborates, »Near the beginning of his first journey.« Ibn Battuta is in the company of others whom he does not seem to know well, and reaches an unnamed city, where »a crowd / Of well-wishers and relatives came out / To welcome them, so that each man was greeted / By a face he new« – the prosody of this passage is gentle and careful: »well-wishers and relatives,« while not being a terribly colourful phrase, is crisp and direct; »each man« gives a certain weight and character to the individuals who might otherwise blur into an indistinguishable crowd.

But I should not have interrupted you, as we are approaching the poem’s pivotal point, where you relate how »each man was greeted / By a face he knew, except for him, / Ibn Battuta, whom no one greeted / Because he was a stranger there, and how / He wept.« Again, you bring the full force of blank verse to bear on this profoundly emotional moment of despair and loneliness.

This is not where your poem ends. What you‘re about to add is uncomfortable, as it draws the reader into the scene you have just described. You tell the reader that this image of arrival »Is what stays with you so that you almost feel / Across the centuries the pressure of / Your hand against his arm, and hear / Your own voice raised in greeting.« At first, this seems to be putting history right, and to affirm, in a beautiful but not entirely revolutionary way, the position of the reader, who finally steps forward to make sure Ibn Battuta is received by a friendly face.

Once we have a closer look at this passage, with which the poem ends, we discover its uncomfortable truths: it is to be found, first, in the rather unobtrusive word »almost,« which reminds us of the limits of our own power. Once we step back from the poem, we realise that Ibn Battuta’s presence within it is contained in your own presence and in your own voice, from which we are equally detached and to which we should strive to return.

Was there ever a moment, near the beginning of your extraordinary career as America‘s greatest scholar and translator of classical Persian literature, where you approached the city, and there was no one to greet you?

There are two further aspects of your poem that strike me as urgently relevant today; they are to do with loneliness, and curiosity. I am one of the final cohort to leave my high school without an email address. I did not know about the Internet until I was twenty years old. When I first went to study on a different continent, staying in touch with those who wished me well was difficult – no less difficult than getting to know new people. Social media have made it easier for us to stay in touch with one another, but I refuse to believe that people are no longer lonely. There is now, I would argue, an even greater stigma attached to being lonely, because it can seem like an outdated emotional state, including a failure to keep up with technology. Your poem is a wonderful expression of loneliness, validating and legitimising it.

The second reason why I think your poem is so relevant is to do with current patterns of, and debates around, migration. We talk a lot about refugees and asylum seekers, and we focus on their »plight« and their rights – to enter our countries and possibly to remain. Based on our national constitutions and laws, we distinguish between those who flee from war and persecution and others who are driven by the prospect of economic gain. We are quick to demand that those who stay conform to our ways of living; liberals and progressives as well as libertarians may be more lenient in this respect. What our current political debate does not take account of is curiosity as a motivation for travel. It may not be at the forefront of the minds of most who come to Western countries today, but its dignity and pervasive presence is worth remembering, if only as a prompt for our greeting.

Thank you for this poem!
Christophe 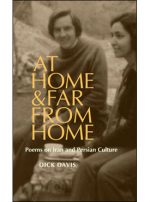 »At Home, and Far from Home: Poems on Iran and Persian Culture« bei Mage Publishers kaufen