over the past several months, this website has featured numerous poems dealing with issues around Heimat. An elusive concept and, arguably, one of the untranslatable German words, it designates the space you feel you belong to, a town or region where you know intuitively how things work and what to do and what not to do. Some people are suspicious of it, and they are often inspired by ostensibly »critical« philosophies developed in the 1960s and 70s which have told people to not simply accept what was given to them. Many a baby of community has since been thrown out with the bathwater of individual liberty.

Today, we are witnessing a wide spectrum of counterreactions to this infanticide across many European countries, ranging from celebrations of local farm produce through the revival of community centres to violent assertions of intransigent, identitarian communities. Once more, baby and bathwater are locked in battle.

The mere fact of having to talk about, and define, the space you belong to could be seen as an indicator of crisis. As is the case with every linguistic utterance, from outburst to sonnet, the articulation of crisis is the starting point for interpretation, inviting audiences and interlocutors to explore ways of dealing with their own sense of belonging.

To say that Heimat is a space is, of course, only half the story: time is equally important. In talking about where we belong, we often say things like, »that’s the way we’ve always done it,« and we remember what happened in a particular location when we were five or ten or fifteen years old.

Going for a walk in the part of Wiesbaden I grew up in has meant, for the past few years, walking past the house that my school friend Harry used to live in; he was killed in his early thirties. Remembering him, I am grateful for so many funny and enlightening moments, which helped me grow and which brought a lot of joy to our whole group of friends. He hosted us when Germany won the European football championship in 1996; he taught me about the importance of small talk simply by drawing attention to the fact that he was always in charge of it when we went anywhere; he had a remarkable way of raising his right eyebrow while looking at you with a distant dictator’s smile. When his younger sister, of whom he was very proud, married into the country’s highest-ranking family (by traditional standards), he said matter-of-factly that her new last name was Prussia, and left it at that.

I miss him a lot.

What made me think of him was re-reading your poem, »The Skimming Stone.« Its speaker relates his memories of skimming stones »to a current brown and slow« during lunch outside the factory where he and his friend used to work; the poem is dedicated to »Billy Knight, who died of a heart attack, aged 38« (the age Harry would be today).

The scene is set in the octave, while the sestet, beginning with the word »Once,« recounts a particular day when Billy »pocketed a stone.« The speaker of the poem tries to interpret this unique, little gesture:

Was it for luck?
Or did you feel a specially close rapport
That day with life, with youth? Or were you struck
Merely that the stone’s smooth warmth implied
A longer rather than a short ride?

There is a twofold crisis in your poem: first, the death of the addressee prompts the speaker to revisit their shared history; second, a particular moment emerges more vividly – not least, I suspect, because it has remained unresolved, representing the exception to the rule of implicit unanimity. This was the moment when Billy was inscrutable, when he came into his own, and when the friendship between the two had a chance to deepen.

It is also the moment that has stayed with the speaker of the poem, indicating that it is the little interruptions to our comfortable routine of belonging which make us appreciate all the more intensely that very routine and continuity. The interruption might then be turned into an occasion for regular commemoration – a feast day is born.

Dear Tim, I know nothing about Billy Knight except for what your poem tells me. To me, Billy is now the man who once pocketed a stone. And so I will remember him.

With all my best wishes
Christophe 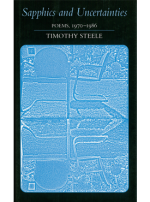 »Sapphics and Uncertainties« bei The University of Arkansas Press kaufen