I’ve just been re-reading one of your darkest poems – »Citation.« It seeks out some of the hallmarks of life in bloated, suburban America: not the big iconic images that we are all used to seeing, but the strong undercurrents of everyday culture that many people are caught up in. Addressed simply as »they,« their dazed and common oddities are many: “Their senior citizens still copulate … They have their MMR and Retrovir. They have their quarter-century more life … The maids have maids, and plumbers go to Paris. They call their waiters ›sir.‹ The poor are fat. They eat. They do not easily embarrass.«

The poem is harsh and one-sided. It casts the behaviour – and the reasons for happiness – of many people as vacuous and pointless; and yet, I don’t think the poem is arrogant. You are dedicating time and poetic effort to the world around you, rather than turning away from it. Between the lines, you remind your readers of their unfulfilled ambitions. Your way of suggesting that life should – and could – be different is to craft a poem about a society and its people. There is little of an alternative vision in the content of your poem; but it is there in the fact that it is a poem. Rather than producing brittle political propaganda or, worse still, idiosyncratic verbal conceits disguised as art, you deliver eloquent lines of iambic pentameter on issues that matter.

I am probably less radical in my endorsement of meter than many of our friends, but I see its virtues in two areas: Writing in meter makes it less likely for a poet to withdraw into that condescending form of solipsism that has come to pass for »real poetry«: What you do, instead, in your poems is a form of communication, with both tradition and a world of people beyond the small poetry industry.

The second point is at once more important and less controversial: Writing in meter is a way of holding yourself accountable to the goals that you have set yourself. This is what amazes me most about your work, and it is what I am intensely grateful for: You do not give up.

The lines and stanzas and poems you make happen are almost painful to read: in their willingness to speak to us – of sadness and loss, of a cement plant, of the site of an accident.

The pain of course is ours. In forcing us to confront it, you offer consolation. This strange virtue of your work is one that many readers hope to find in poetry. It is many readers’ very reason for turning to poetry: They live in a world of addiction, violence, destitution, uncertainty. They do – we do. We have learned to live this way, and yet sometimes it is just too difficult to bear.

What makes it so difficult to bear is our inability, very often, to speak about what we are exposed to. Our languages may be generous; but they do not easily fit. We require assistance. You do not give up on us.

Your first volume of poems was entitled, The Optimist. Few found optimism within it. The new book’s title, Accepting the Disaster, may be equally misleading: Your readiness to explore failure and suffering reminds us that there is something at stake in poetry – and that we should not give up on the world around us, as it is one that can be shared.

What, then, of the bleakness of it all? What of those American plumbers flying to Paris? The tedium of every-day pomposity? Aren’t these all bad things that you are really quite dismissive of? I am not sure. The care you take in talking about them reminds us that we can consider doing things differently, however many reasons there may be for us to have done them that way thus far. It is complacency you dismiss, not the ordinary.

I’ve been talking a whole lot about »you« and »us« now, although I am not quite certain whether the distinction is all that clear-cut. »You,« the poet, say quite a few things that we might also say: »This is the place it happened. It was here.« A wonderfully natural line – one that we may have uttered many times. It is precisely this eloquence that makes it hard to translate. I’ve settled for »Das ist die Stelle. Hier ist das passiert« in my German version of »The Crossroads.« An unexpected solution maybe, but not because it’s stilted (I don’t think it is!) but because it’s »un-poetic.« German poetry used to oscillate between the incomprehensible and the outdated. What you show us, Josh, is the beauty of a contemporary poetic idiom that we are ready to share. Translation is my way of expressing this gratitude, as much as it is my way to confront the moments, some of them centuries-long, of loss and loneliness that your work is about.

Let me finish by quoting a few lines that brought tears to my eyes. They are, rather unusually, a prayer-like address to rabbit and hare, whom you invoke as our ancestors:

Grandfather rabbit, and grandfather hare,
forgive us, your forgetful progeny,
who unleash dogs to shake you in their jaws,
then sell your hacked-off hands as souvenirs.
Forgive us. Our hearts, too, are very little,
and race with blood as tenuous as our fate:
We also tremble helplessly or flee.

I am writing this letter on an airplane, in flight mode.

They are telling me to turn off my devices.

I send love, to you and Talia!
Christophe 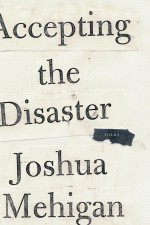