Writing in a Brave New World

Anton G. Leitner (born 1961) has dedicated his life to poetry. Today, he is a widely known and renowned author, reciter and publisher in German-speaking countries. So far, he has published eleven collections of his poems. He is editor in chief of Das Gedicht, one of the main magazines for contemporary German poetry, which celebrated its 25th anniversary in 2017. Leitner is the recipient of numerous awards and accolades including the Tassilo Award for developing culture from Süddeutsche Zeitung (2016).

Leitner’s collections of poems have been acclaimed to be “among the best of what contemporary poetry has to offer” (Matthias Ehlers of WDR ‒West German Broadcasting). The poet and translator Paul-Henri Campbell describes his literary style as follows: “Leitner’s mode of observation is never cynical but often ironic when casting poetic arrangements. In doing so, he is inherently and strikingly Bavarian: a self-deprecating poet, a gleeful master of the apercu or the surprising right hook, always somewhat at odds with propriety and decorum.”

In November 2018 a selection of Leitner’s best poems has been published by Survision Books, Dublin. Translations by Richard Dove, Paul-Henri Campbell, Anatoly Kudryavitsky and Yulia Kudryavitskaya make Leitner’s oeuvre accessible to English readers and give a broad overview of his works of the past three decades. A must for all fans of contemporary German poetry! 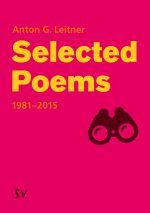 For post-free delivery in Germany order at www.dasgedicht.de

But it is
No longer.

The land with other
Eyes. (Its gaze wanders

From blue to yellow to
Green.) A shifting

Pillow for a quiet
Night in a lap.

Every Time He Watches Soccer

There’s no need for him to sweat;
His better half(pint), a translucent

Blonde, will still appear
In front of him. Once in a while

Meantime the missus is fidgeting
In her lonely bed, already dreaming

Of another fella who won’t carouse
Every time there’s a kick-off.