In its 21st year, the poetry magazine DAS GEDICHT, based in Munich (Germany), is launching an international edition that offers a roadmap of poets writing in contemporary Germany, Austria, Switzerland, the Netherlands and Israel.

The editors Michael Augustin, Anton G. Leitner, and Paul-Henri Campbell have gathered some of the most interesting poetical voices in the German language, such as Günter Kunert, Helmut Krausser, Tanja Dückers, Matthias Politycki, Jan Wagner, Ulrike Draesner, or Ilma Rakusa.

Germany, known as the Land of Poets and Thinkers, has been successful in exporting refrigerators, cork sandals, and sedans, while its contemporary poetic production is virtually unknown outside the German speaking countries. This is quite a surprise, because its poetic landscape is one of the most vibrant, innovative, and varied literary topographies in the world.

German Poetry Now is inspired by the leading poetry magazine in the language,
DAS GEDICHT, and offers a selection of 50 acclaimed and new authors. »Pegasus & Rosinante. When Poets Travel« brings together the odysseys and wanderlust of German poets on the backdrop of the sinuous history of their people. These poems are fascinating, but also thought-provoking documents redefining the state of the art in the productive tension of division and reunification. In the past two decades, DAS GEDICHT has shaped this literary landscape like no other magazine of its kind. Instead of concentrating on isolated cliques, it brought poetry to a general audience.

The world has often been bamboozled by the German philosophers. With its English edition, we hope the international community may grow fond of the rich variety in German poetry — these kooky bards, seemingly forever tragically oscillating between the euphoric »Jawohl« and the nihilistic »Nein«, as well as the melancholy »Jein«. 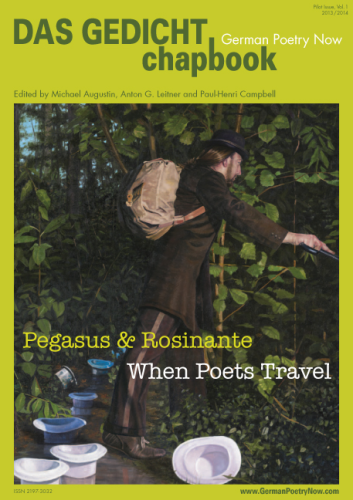 »Every Grand Tour starts out on a tricycle«
Walle Sayer

»The ash accrues, piles up, collects, and rises,
climbs up the façade, climbs like a thief,
climbs into the room like a thief.«
Tuvia Rübner

»It’s one thing to translate a dead poet. But translating a score of living poets might offer
at least a certain degree of risk. While a translator usually translates a large corpus of work by a single author, I was confronted with 60 individual pieces by 50 individual authors.
The difficulty was posed by the dazzling varieties of linguistic, aesthetic, and thematic situations that I passed through. Each poem came from its own cosmos. And what
is to be delivered by the translator is not a translation of a poem, but a poem based
on a poem.«

Paul-Henri Campbell (from »Translating the Zeitgeist«) Michael Augustin (born 1953 in Lübeck, Germany) is one of the most active promoters of poetry on German radio. The globe-trotting poet has participated in major festivals around the world, such as Medellín, Dublin, Barcelona, and Caracas. Augustin is a director of the international festival »Poetry on the Road« in Bremen. A recipient of the »Friedrich-Hebbel-Preis», he is a member of the Irish and German P.E.N. A selection of his work in English translation, »Mickle Makes Muckle«, is available from Dedalus Press, Dublin. Anton G. Leitner (born 1961 in Munich, Germany) is a trained lawyer and lives as writer, editor, and publisher in Wessling/Munich. In 1993, he has founded DAS GEDICHT and continues to serve as its editor in chief. For more than 30 years, he has edited defining anthologies for major German publishers, such as Deutscher Taschenbuch Verlag, Reclam, Artemis & Winkler. Leitner is the author of nine volumes of poetry. He has received numerous awards for his work, including the »V. O. Stomps-Preis« as well as »AusLese« from Stiftung Lesen. Paul-Henri Campbell (born 1982 in Boston, USA) is a poet and translator. He is a bilingual author and writes in German as well as English. He is the author of three volumes of poetry, including »Space Race« (2012) and »Am Ende der Zeilen« (2013).

The editors would like to cordially thank Ulrich Beck for his support making this project possible.